I'll retire to my cattle farm after my tenure in 2023 ~ President Buhari | .Seaija 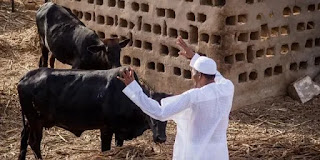 President Muhammadu Buhari says his plan after his tenure ends in 2023 is to retire to his farm and tend to his cattle.


.......... The president addressed a range of issues during the rare interview, especially touching on the herders-farmers crisis that has plagued the country especially under his administration.


.......... With many in the country clamouring for the end of open grazing of cattle which routinely brings herders in conflict with local communities, leading to bloodshed, Buhari is more interested in reopening old grazing routes.


.......... "The problem is trying to understand the culture of the cattle rearers," the president said, as he repeated his claim that the herders causing trouble in the country are not Nigerians.


.......... The president also expressed his strong objection to power devolution and agitation for secession, noting that its promoters are not thinking deeply enough about consequences.


.......... Buhari refused to be drawn into talking about his legacy when he leaves office, opting instead to allow Nigerians decide.